the Dead sea and hotsprings

On Monday we gathered at our friends' place again to enjoy what we called 'Asian night' because Ismail from Malaysia and Mizuki from Japan cooked some delicious Asian food for us. I don't really recall the names of each and every dish that was made (partly because there were many!) but some that come to my mind are Teriyaki chicken and also something Indian. What is important is that we ate a lot and well. 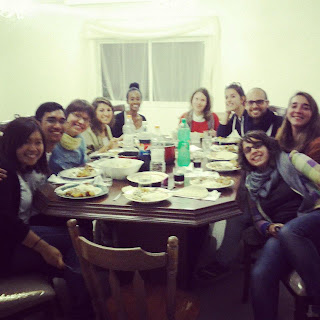 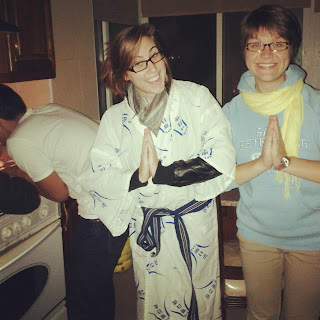 So, during our conversation at the table we found out that Abeba and her friend Marie from Sweden who was visiting her at that moment decided to go to the Dead sea and the hot springs the next day, and they were looking for some people to share a taxi with them. ALthough it was quite out of my budget, I decided to go because I wasn't sure if I would have any other chance to go since I am going back to Russia for two weeks, and it might be too cold by the time I come back. So out of the blue I was going to go to the Dead sea with my international friends from all over the world. We rented a car for 60 JOD which I believe is a bit expensive, but since we split between 5 people, it didn't really cost a fortune, and it was nice since the car took us to the hotsprings and the Dead sea altogether.
First we went to the hot springs of Ma'in which are located nearby the Dead sea (about 10 km or 6 miles). The place is amazing! Who would have thought that there are actually some waterfalls in Jordan, AND - what is more - with naturally hot water which resembles that of Iceland. In fact, water in Ma'in hotsprings even smelled the same as in Iceland - of sulphur. It's a privately run attraction, so you will have to pay for the entrance - 10 JOD for students/residents and 16 JOD for non-residents (which is totally worth it, especially taking into account that there are some relatively clean changing rooms and bathrooms there). Since we went there during the week day, there were only a few people there (oddly enough, Russians), so we had a chance to fully enjoy ourselves. The water temperature varies from 45 C to 60 C, so be careful since it might be hot! 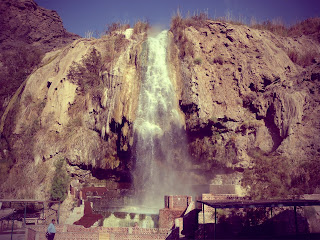 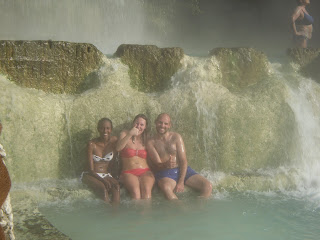 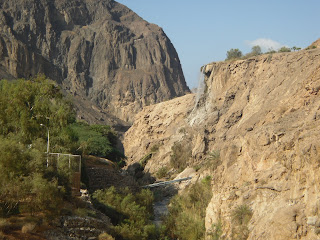 After spending about an hour in the hotsprings (which we felt wasn't really enough) we headed to the Dead sea. Since being in a public beach might get very embarrassing - I personally recall a story from my Polish university friend who went to a public beach in the Dead sea and got all harassed and embarrassed becaue the locals were taking pictures of her and her friends! - it's really a smart idea to pay 10 JOD (students/residents) or 16 JOD (non-residents) and go to a privvate beach. We went to the most popular one called Amman Beach. The beach itself is ok, pretty clean and nice, and there are changing rooms, showers and a swimming pool (although the water was freezingly cold and therefore not really suitable for swimming).
The Dead sea is just as they say it is: because it's so salty, you are literally floating on the surface like a cork without putting any effort into it! Besides, there is no chance that you will step on a jellyfish or coral or any other creatures simply because there are none. No living creature except for some weir bacteria can survive the level of saltiness in the Dead sea. By the way, they say the sea is pretty deep - about 300 meters in some places. Oh, and the water is kind of oily as well, as if you put some lotion. Not particularly a pleasant feeling, I should admit. 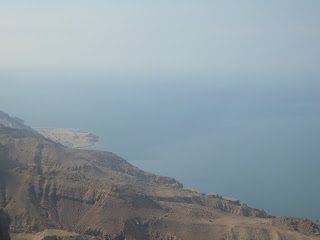 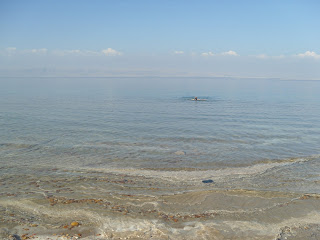 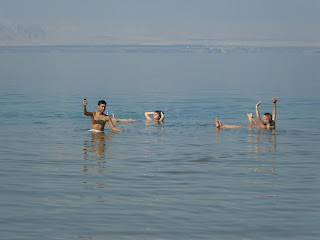 The other entertainment in the Dead sea is to get oneself completely covered with mud taken from the sea itself. Sadly, we had to pay for it as well (the fee is 3 JOD) but if you want to avoid extra expenses, you can try, dig inside and get some mud from the bottom of the sea. I am not so sure that this mud is so very useful and good for health and skin, but oh well - at least the pictures turned out great :) 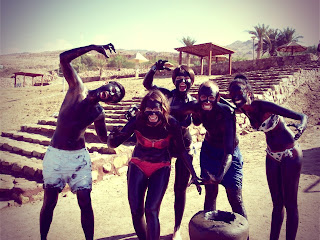 By the way, the temperature in the Dead sea region is normally higher than that in Amman, so plan in advance: if you go there during summer or the beginning of fall, it will be uncomfortably hot there.
After our little adventure we dined at a nice, cheap and tasty Yemeni restaurant near the North gate of the University (God, do I love their bread!) and I was so full that it hurt even to talk, let alone walk back home. But it was a great day and a good getaway from Amman for one day. 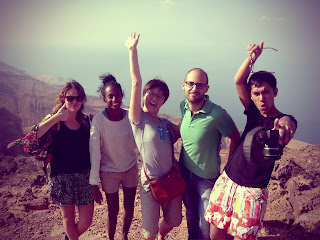 Today my friend Marianna from Poland met some of her local friends who came to Amman from Irbid (the second biggest city in the country) for an AIESEC conference. Turned out that the guys are two of the most amazing and open-minded and intelligent local people that I have met so far. We had a very interesting conversation about sexual relations in Jordan (absence of them, that is) and sexual harassment and that kind of stuff.

It got me thinking why is it so that it was actually in Christianity that was said, 'Ok, it's better if you don't get married (Jesus didn't have a wife, point taken) but people are weak, so you can get married but be careful with that' and so on, and so forth; whereas Islam specifically teaches that it's best for a man to get married if he has an opportunity to support the family and feed them all, etc. In fact, that's why we don't have monks or nuns in Islam. However, it turned out quite the opposite: Christian world is much more open to sexual relations including just regular relationships between sexes, not necessarily meaning sex itself, whereas the Muslim world is suppressing all the desires and even the slightest thoughts about intercourses or any other kinds of affairs which turnes into perverted harassment and total lack of understanding the whole situation and how to deal with the opposite sex. Here men don't shake hands with women, sometimes they don't even talk to each other because then people will think that this girl is easy and nobody will be willing to marry her. Or worse than that - a guy will have an intercourse with a girl and then just abandon her because she sleeps around and he doesn't want that kind of a wife, which in my opinion is just totally screwed up.

I don't know how much it will take for the Jordanian or any other more or less Muslim society to change, especially now that we see the Islamists like the Muslim brothers coming to power in many Arabic countries, but I am sure that if there were more people like Mohammad and Nizar that I spoke to today, life would be so much easier and better, and not only here. We need Mohammads and Nizars like these in the whole world.
Автор: Unknown на 11:55 Комментариев нет:

It's been a while!

It really has! During a month that I didn't post anything on my little wordpress blog I actually did some interesting stuff. For instance, I went to Israel and the West Bank to visit my friends, one of whom live in northern Israel in the Druze area and the second one is in Nablus at the moment working for the an-Najah University there. The thing is that we actually had a long break at the university due to the celebration of Eid al-Adha which is one of the two major Muslim holidays, and that gave me a chance to travel a bit.

Frankly speaking, it wasn't really that easy to get into Israel: I had to wait on the border for like 7 hours in a row. It was just as much fun as what it sounds like meaning NONE. It turned out that I travel too much (never thought this can ever be a problem), and Israeli customs officers found that slightly suspicious. Well, all's well that ends well, and I was finally granted entry stamp.

To cut the long story short, my stay in both Israel and Nablus was wonderful despite all the difficulties. I ate kunafah nablusiyah (a local sweet made of honey, cheese and some other delicious stuff), visited the Old city of Nablus which reminded me of Damascus, hung out with amazing people who studied in the Soviet Union therefore speak fluent Russian and love all Russians with all their heart (I wouldn't be so sure about this part but oh well, it was still very nice to be treated this way).

As for Jordan itself, I went to Madaba and Mount Nebo with the language center from the University. There is an ancient mosaic depicting a map of Palestine in Madaba's Greek Orthodox church. Mount Nebo is famous for being a site from where God showed Moses the Promised Land. In fact, you can actually see a lot of Palestine from there, even Jerusalem in the good weather.
I also visited a couple of parties during this last week one of which was a birthday party for my Malaysian friend Ismael, and the second one was a mansaf dinner at my university friend's Mounia's house. Mansaf is a traditional Jordanian food of rice and lamb and a sauce (labneh) which makes it so special. To say that we were way too full and way too happy about all that is to say nothing. We literally rolled out from the table, so full we were.

Today was special, too. I went downtown Amman to study for my test tomorrow with my Polish, Jordanian and Norwegian friends. We went to a traditional Jordanian restaurant Hashem which serves only vegetarian stuff like hummus and falafel and all that, and it is de-li-cious. There are many tourists as well because it's mentioned in the Lonely Planet guide. Well, to be honest, it deserves its fame and glory.
So that's how things are for now. Jordan is still unraveling its mysteries to me. 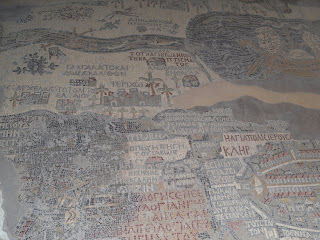 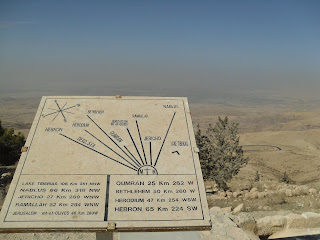 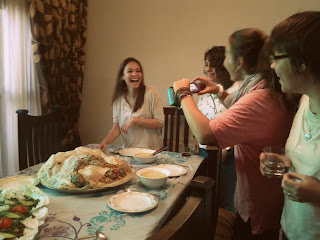 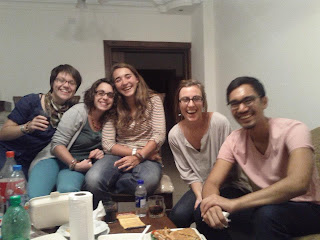 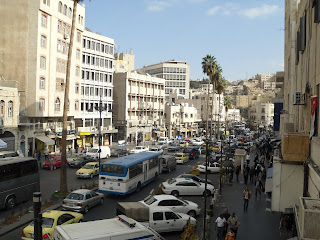 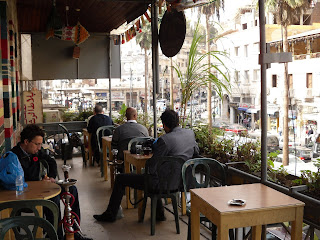 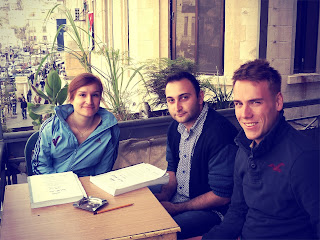 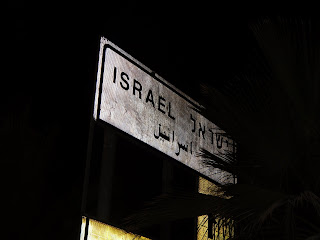 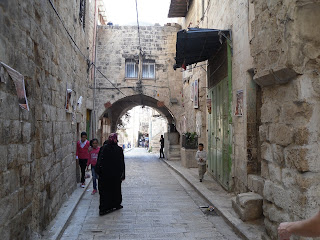 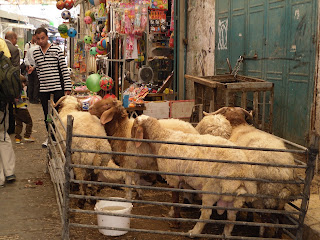 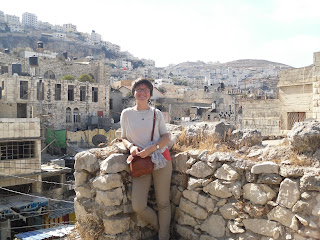 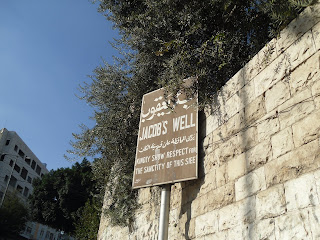 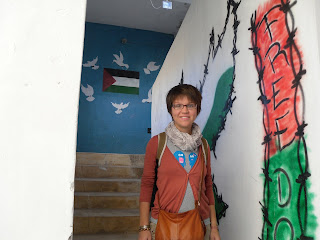 Here we go: a Russian girl in Jordan

Ok, so here we go! My name’s Olga, and I am a graduate from St. Petersburg State University. At the moment I am taking Arabic course at the University of Jordan in Amman, and it’s been a whole lot of fun ever since I arrived. I”ve been living in Jordan for a month now (in fact, yesterday was my first little anniversary here).
Life in Amman is much different from what I am used to back home in St. Petersburg. Firstly, it’s warmer, and I am still not freezing to death and can even wear my sandals, even though we’re way into October. Secondly, here I get so much attention from all the cars passing by that I feel like a little star every time I walk to the uni and back. It might get disturbing from time to time, but mostly I just learned to ignore those honking freaks. Thirdly, I eat so much hummus and muttaba and mansaf (these are all local kinds of food, very delicious) that I think soon I will turn into a fatty.
But I learned my way around. Now I can even take a bus by myself, and taking a taxi is just a piece of cake. I actually started to communicate with the guy in the little store close to our house where we buy water and some supplies. I made some really good friends here and I enev traveled to a couple of places outside Amman. So, I can actually say that I live here now, and I enjoy it greatly. 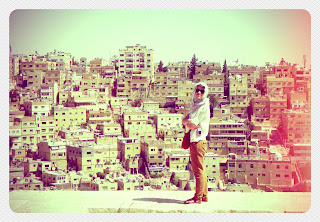